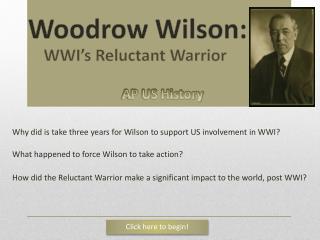 Woodrow Wilson:. WWI’s Reluctant Warrior. AP US History. Why did is take three years for Wilson to support US involvement in WWI?. What happened to force Wilson to take action?. How did the Reluctant Warrior make a significant impact to the world, post WWI?. Click here to begin!.

AP U.S. History Ch 15, 340-345 - . the blossoming of a national literature. literature was imported or plagiarized from

AP US History This Day in American History September 19 - . 1827 – after a duel turns into an all-out brawl, jim bowie

CHAPTER 15 THE FERMENT OF REFORM AND CULTURE AP US HISTORY - . alexis de tocqueville. french man who came to america to

How to Create an AP US History DBQ - . a dbq… what is it?. contrary to popular belief, a dbq is not a means by which i

AP US HISTORY - . essential questions. what did “america” look like when europeans got here?. what were the natives