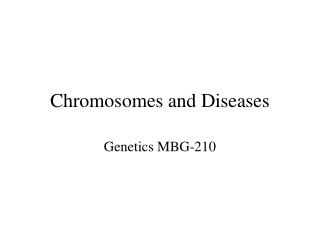 Chromosomes and Diseases. Genetics MBG-210. How many chromosomes in humans?. Theophilus Painter in 1921 characterized the number of chromosomes as 24 on spermatocytes. Others repeated the experiment and somehow came up with the same conclusion.

Chromosomes, Mitosis and Meiosis - . chapter 10. learning objective 1. what is the significance of chromosomes in terms

Diseases of Respiratory System : - . general objective. by the end of this session each student should understand the