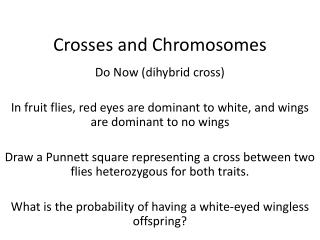 Crosses and Chromosomes. Do Now ( dihybrid cross) In fruit flies, red eyes are dominant to white, and wings are dominant to no wings Draw a Punnett square representing a cross between two flies heterozygous for both traits. What is the probability of having a white-eyed wingless offspring? .

Topic 4 Genes, Chromosomes - . offspring acquire genes from parents by inheriting chromosomes. each gene in an

CHROMOSOME THEORY OF INHERITANCE - . proposed in 1902 by walter sutton and theodor boveri noticed that transmission of

Symbols to Know for Crosses - . a/a – a is the allele and / represents the two chromatids – there are two alleles for

Monohybrid Crosses - . objective use the punnett square method to determine the possible genotypes of different

The Chromosomal Theory of Inheritance - . chapter 15. sex-linked sex-limited sex-influenced traits. evidence for the

Diploid, Haploid and Dihybrid crosses - . use the terms ‘diploid’ and ‘haploid’ to describe somatic and gametic