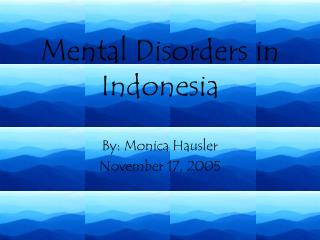 Mental Disorders in Indonesia. By: Monica Hausler November 17, 2005. Malaysia. Culture definitely has an influence over the mental health of those who live in Malaysia. Depression Anxiety Hypochondria Epidemic Hysteria Obsessive-compulsive Disorder

The 18th Vow of Amida Buddha - . from the larger sukavativyuha sutra. if, after my obtaining buddhahood, all the beings

The Effect of Immigration on The Psychosocial Development of Adolescents - . by suelle micallef marmara’ bsc ( hons )

Human Trafficking North Dakota - . identifying and understanding. disclaimer. i am only responsible for what i say, not

Mental Illness - . refers to a group of psychiatric disorders characterized by severe disturbances in thought, mood, and