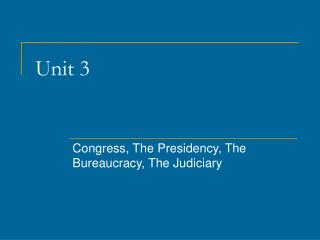 Unit 3. Congress, The Presidency, The Bureaucracy, The Judiciary. Becoming a member Parliament: persuade political party to put name on ballot Someone willing to support national policy and party Election is choice between parties, not people Congress: run in a primary election Psychology Unit 3 Revision PowerPoint - . criminological psychology. defining the approach. in this section, you need to