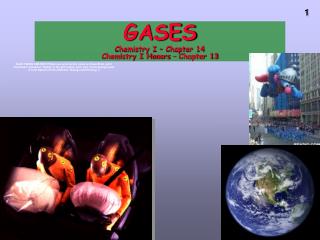 GASES Chemistry I – Chapter 14 Chemistry I Honors – Chapter 13. SAVE PAPER AND INK!!! When you print out the notes on PowerPoint, print "Handouts" instead of "Slides" in the print setup. Also, turn off the backgrounds (Tools>Options>Print>UNcheck "Background Printing")!.

Chemistry II Chapter 5 Thermochemistry - . 1. the study of energy and its transformations is known as _thermodynamics __.

Chapter 14 Properties of Gases - . the properties of gases. gas can expand to fill its container gases are easily

Chemistry Chapter 8 - . covalent bond a bond formed by the sharing of electrons between atoms . molecule a neutral group