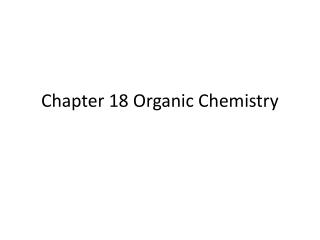 Chapter 18 Organic Chemistry. Objectives. 18.1 Write and interpret structural formulas of linear, branched, and cyclic alkanes , alkenes, and alkynes 18.1 Distinguish among isomers of a given hydrocarbon 18.1 Infer the relationship between fossil fuels and organic chemicals. Objectives.