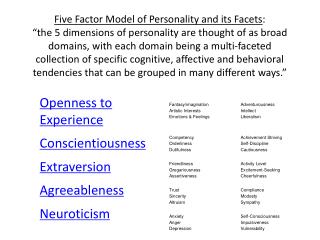 Five Factor Model of Personality and its Facets : “the 5 dimensions of personality are thought of as broad domains, with each domain being a multi-faceted collection of specific cognitive, affective and behavioral tendencies that can be grouped in many different ways.”. Openness to Experience

Openness - . team extra credit . our research. for our project, we studied the openness section of the big five theory of

Andy Dufresne and the BIG 5 - . component 1. component 1: describe the movie and the specific scenes which you analyzed.

Big Five Personality Tests have Substantial Weaknesses - . from the people at: personality and aptitude career tests.com.

Trait Approaches to Personality - . lecture contents. from cardinal to basic traits issue 1: what and where are traits?