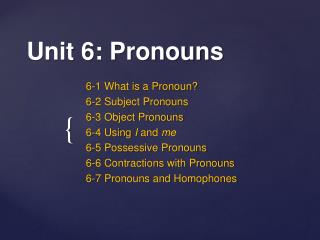 Unit 6: Pronouns. 6-1 What is a Pronoun? 6-2 Subject Pronouns 6-3 Object Pronouns 6-4 Using I and me 6-5 Possessive Pronouns 6-6 Contractions with Pronouns 6-7 Pronouns and Homophones. Which words replace snails in the second line?. Snails leave trails. They drag their tails.