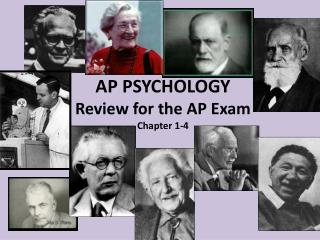 AP PSYCHOLOGY Review for the AP Exam Chapter 1-4. Success on the AP Psychology Exam. Knowledge Need to know the material of a typical Introduction to Psychology course at the college level. Typical college course meets for 15 weeks, 3 times a week for 45 class hours.

Psychology Semester 1 Final Review - . two research methods widely used by psychologists are a. precognition and the