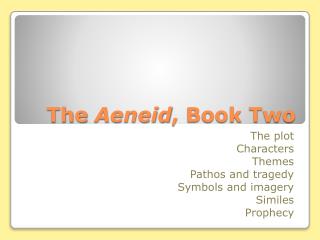 The Aeneid , Book Two . T he plot Characters Themes Pathos and tragedy Symbols and imagery Similes Prophecy. Through understanding the themes, language features and symbols we can comprehensively evaluate and discuss Book Two. Learning Objective. Who was Laocoon? The Aeneid Book 1 - Book i of vergil's ancient epic poem, the aeneid. this is a pictorial

The Aeneid : Book one - Mrs. cave-mattie. the aeneid : book

The Aeneid Book III - . by: regan ewing, virginia smith, and laura spence. story plot. aeneas is telling dido about his

Aeneid Book VI - Brief summary. aeneas and the trojans finally reach italy, where they show up at the island of cumae.