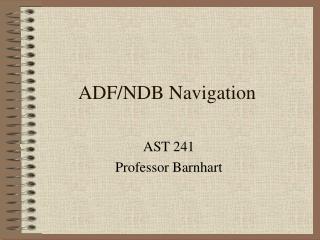 ADF/NDB Navigation. AST 241 Professor Barnhart. NDB Background. Oldest form of radio navigation still in use Operate in the LF/MF range (190 – 535 kHz- or between 100 and 10,000 meters) Still in use because of its simplicity and low cost to set up and operate + decent accuracy The ADF Employment Package ... - Click once to proceed. the adf employment package . … and how the workplace

ADF Architecture Square - The preceding is intended to outline our general product direction. it is intended for

ADF Enterprise Methodology Group - . jdeveloper [adf emg] member survey results. why, what, where, who, when. once upon a