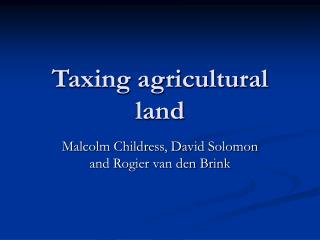 Taxing agricultural land. Malcolm Childress, David Solomon and Rogier van den Brink. What is a land tax?. “land tax” is a tax on the value of land, which is paid by the owner. Different from a property tax: land tax taxes the value of the land only Taxing - . i. sources of federal revenue a. key constitutional provisions 1. tariffs must be uniform. 2. direct taxes

Taxing sugar - . a sweet idea?. sugar tax overview. philadelphia is among one of many cities that have decided to tax

Taxing Example - . former english soccer star david bledham has announced that he will partner with the martin e. drey

taxing times - . test your tax time vocabulary! what’s the definition of each word? use it in a sentence!.

Taxing Example - . former english soccer star david bledham has announced that he will partner with the martin e. drey

Citizens for Agricultural Land Reform - . a solution for sustainability for the agricultural land reserve. proposal.

Agricultural and Rural Land Use - Four sectors of the economy. primary: draws raw materials from the natural environment;

Agricultural and Rural Land Use - . standard 5. development and diffusion of agriculture. agriculture : is deliberate