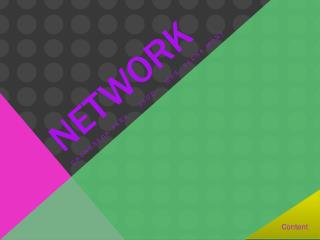 Network - . done by: athra sultan. contents:. introduction of network. what can i do with a simple network? network

Network - . this document contains network’s confidential proprietary information and as such recipient agrees not to

Network - . john 21:1 after these things jesus showed himself again to the disciples at the sea of tiberias, and in this

Network - . network. a computer network is a group of more computers connected to each electronically, consisting in a

Network - . pajek. introduction. pajek is a program, for windows , for analysis and visualization of large networks