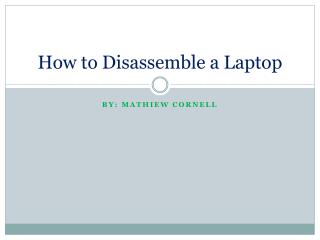 How to Disassemble a Laptop. By: Mathiew Cornell. Objective. After viewing this lesson, you will be able to take apart your laptop to see each individual component. Requirements. For this lesson you will need a laptop. You will need a screw driver How to disassemble your HP laptop? - Disassembling an hp laptop is an essential task so as to maintain the good

How to Repair a Laptop Screen - Esanyog is best laptop repair and services in pune. we have all kinds of laptops repaired

How to Pick a Laptop Keyboard - By following these tips, you can be sure that your wrists and hands will feel great. why

How to Format a Lenovo Laptop? - If your lenovo laptop’s hard drive often needs a remedy to heal the glitch available

How to Connect a Laptop with a TV - Watching everything on a bigger screen is a fantastic feeling altogether. but

HOW TO FIX A FLICKERING LAPTOP SCREEN - Laptop computers have lcd displays that are sensitive to several things. lcd

How to Wipe Data On a Laptop - Http://www.xtremeworx.com.au/about.php - windows does not actually delete the data but

How to troubleshoot lenovo laptop - If you need a business-friendly laptop that's designed to last the course, and