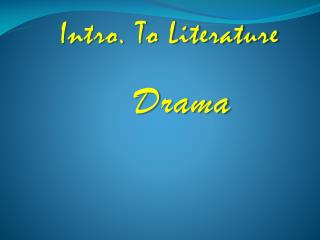 DRAMA - . history of western drama. drama. fiction in performance a prose or verse composition intended for

Drama - . elements of a play. plot characters stage directions. plot and structure. the plot in a drama introduces

Drama Contract - . (a) 1 person to speak at any one time (b) no horsing around (c) when you hear my 2-claps, everyone

Drama in the Victorian era: Playwrights and Plays - . by adam and manon. melodrama. melodrama was very popular in the

The Drama Triangle - . by team “conflicted”. “…the play’s the thing…”. stephen karpman. review. the play