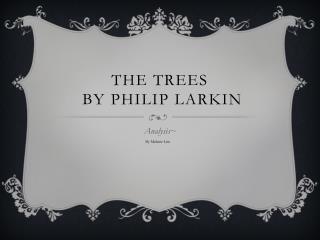 Trees by Tyzick - . trees give oxygen the leaves fall down off branches i love the red leaves. roses. the sun shines on a

Philip and the Eunuch - . acts 8:26-40. philip. an angel told philip where to “go” worked miracles in samaria acts

At Grass by Philip Larkin pg 30 - At grass. this is a poem about the way growing old affects our lives. philip larkin

Born Yesterday For Sally Amis By Phillip Larkin - What is it about? brainstorm.born yesterday. ?born yesterday' is about

THE TREES - . by philip larkin. the trees.  the trees are coming into leaf like something almost being said; the recent

Philip Larkin - . toads. theme. the theme of the poem is work. he is comparing work to a toad. he is jealous of the

This Be the Verse BY PHILIP LARKIN They fuck you up, your mum and dad.    -     they may not mean to, but they

Discussing Deadly Unna by Philip Gwynne - . the characters. the town. town attitudes. “sports one thing, this is

The American Soldier By Philip Freneau - . slides by nick wright. a picture from the life to serve with love, and shed

The Bean Trees by Barbara Kingsolver