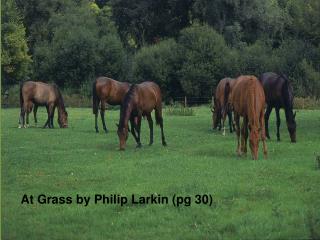 Philip Larkin - . philip larkin - this be the

Philip Larkin - . themes and technical features. larkin’s subjects were: “men, the life of men, the passing of

Philip Larkin - . toads. theme. the theme of the poem is work. he is comparing work to a toad. he is jealous of the

Philip Larkin - This Be The Verse - . they fuck you up, your mum and dad they may not mean to, but they do they

Please do not talk at this time Sept 30 - . hw: wwii test on tuesday. i will collect the following on tuesday: pg.22a:

PG 30-32 GENETICS - . notes and vocabulary. genetics - the study of heredity . heredity - a set of characteristics

By PG - The rainforest animals. by pg. the harpy eagle. the habitat; harpy eagles are found in tropical lowland forests