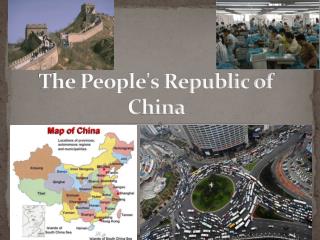 CHINA The Republic 1912-1949 - . the guo min dang. warlords. the communists. the japanese invasions. civil war and the

How did Nixon’s Visit to China Change the Cold War? - . mr. ornstein willow canyon high school ib: history of the

The accession of China - . history. china was one of the 23 original signatories of gatt (1948) 1949: chinese revolution

Warm Up - . which leader won china’s civil war, and what name did he give to the new country? a. mao zedong; people’s

Technology in The People’s Republic of China - . by: caroline dickensheets, shaina patel and kirsten schulz. political