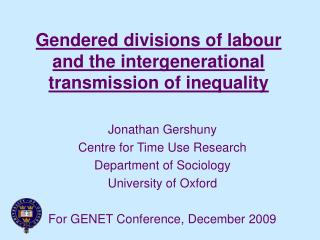 Gendered divisions of labour and the intergenerational transmission of inequality

Gendered divisions of labour and the intergenerational transmission of inequality. Jonathan Gershuny Centre for Time Use Research Department of Sociology University of Oxford For GENET Conference, December 2009. This Talk. Proposition:

Gendered divisions of labour and the intergenerational transmission of inequality Intergenerational Communication in the Workplace - . “the real voyage of discovery consists not in seeking new