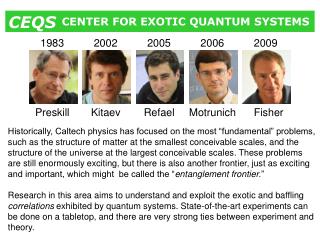 Center for Quantum Information and Control - Quantum control and feedback: a circuit-based perspective is there a

Duke Center for Systems Biology - . origins. “a systems biologist views biological problems through the eyes of a

Joint Center for Applications of Coherent Quantum Phenomena - . the university of maryland, the laboratory for physical