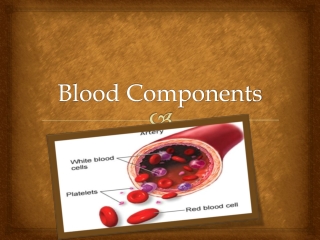 Blood Components. BLOOD. Everybody is familiar with the sight of blood - the red fluid that oozes out of your body when you've sustained a cut or a deep injury, which is slightly denser and approximately 3-4 times more viscous than water. Blood volume Blood Typing - Blood grouping. transfusion is the transfer of blood or blood components from one individual to

Blood Components and Plasma derivatives - . the anticoagulants and preservatives that are added to blood nowadays enable

How to prepare an attractive PowerPoint presentation - . prepared by sherzad abdurrahman muhammad m.sc. in oral

COMPONENTS OF BLOOD - . plasma. liquid portion of blood makes up 55% of the blood volume. plasma has 6 major components.

THE RATIONAL USE OF BLOOD AND BLOOD PRODUCTS - . presentation aims. to discuss the following: the various components