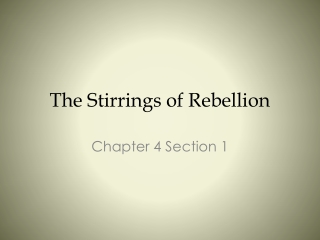 Libya: 5 years since the Spring - The libyan uprising, that was sparked by clashes in benghazi and escalated into a

The American Revolution Chapter 8 - . what did colonists want king george iii to do?. stirrings of a revolution. angry

ZEUS - . one rebellion against his power other gods led by hera (except hestia), joined by young apollo ( son of zeus

China’s Drive for Modernization - Chapter 29:iii - - . at the end of the nineteenth-century, european nations were in

Matisse and Picasso - . matisse &amp; picasso. each inspired a different form of rebellion against realism, one of

How did simmering unrest in Cuba lead to rebellion? - . cubans were unhappy with spanish rule there were a series of

Boudicca’s Revolt - . who was boudicca? why did she rebel against the romans? was her rebellion a success? what

What was the Stamp Act? - Time to get “coached up” on the stamp act and the intolerable acts!. what was the stamp