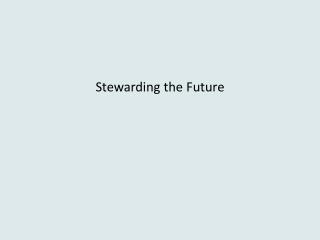 Stewarding the Future. Sustainability is an iconic term. It implies a commitment to manage natural and cultural resources to ensure their continuance into an indefinite future. How far ahead is that? No general agreement. This is a futurist stance. What supports this view? Ethical: Fairness

How do you model the future? - . stochastic approach: the future can be modeled as a distribution over possible events.

MAP YOUR FUTURE - . a career planning guide. it is never too early to think about your future!. my future??. because,

Future and Conditional Perfect - . the future perfect tense is the past of the future, in a manner of speaking. it shows

Future PLC - . introduction to future plc. future plc was established in 1985 as a uk company with just one magazine

Future tenses - . mª victoria andaluz celia iordache 1º c. the future in english can be expressed in many different

Future and Future Perfect - . future tense. there are two sets of future endings. the set used is determined by a

Building Donor Relations and Stewardship into Your Fundraising Program: A Donor-Centric Approach - Presented by daniel