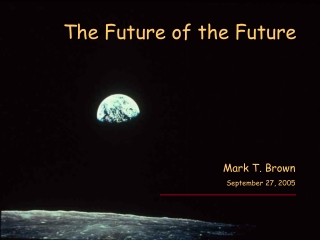 The Future of the Future. Mark T. Brown September 27, 2005. Connect threads. INTELLECTUAL TAPESTRY - something that is felt to resemble a tapestry in its complexity;. Thread #1: Whats Education For?. courtesy of David Orr. The future and the future of probability

The future of: - . celeste gutierrez. this is me. i’m a realist i am easy to love i was born in porterville, california

The Future - . may 2, 2013. opportunities to discuss course content. today 11-2 no office hours tomorrow or during finals

The Future - . chapter 20. need for trained and knowledgeable evidence collectors “however, academia must strive to

THE FUTURE - . where to go from here?. the future: some pre-requisites. #1 every organized human activity gives rise to

The Future - . what technology has in store. rolanda e. stinson. future technology. “nothing is wasted, and nothing

The Future - . forward. the future. material properties, such as corrosion resistance, fire resistance and durability are

The Future - . july 8, 2008. short history of the future. the historicists the professional prophets the amateur

THE FUTURE - . what are you doing on saturday evening? i ’m going to the theatre. my train leaves at 10:30 this