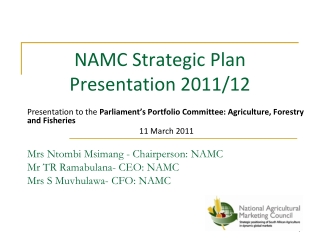 NAMC Annual Report Presentation 2008 - Documents to be tabled. thank you for affording the namc the opportunity to

IT Strategic Plan Open House - . dave wallace, cio, andrea chappell and the team. the it strategic plan project. to

Presentation ON STRATEGIC AND ANNUAL PERFORMANCE PLAN 2013/14- JUNE 2013 - . content of the presentation. background and