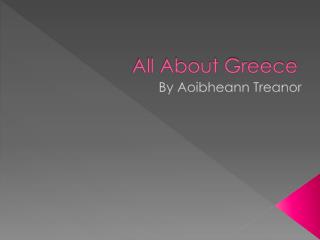 All About Greece. By Aoibheann Treanor. GREECE. All About Greece - . where is greece?. greece is located in the balkan peninsula and borders with albania, fyrom,

Amazing Facts about Greece - Greece is one of the most popular tourist destinations around the world. in fact, this