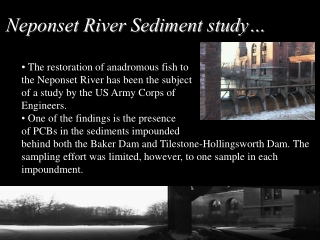 Neponset River Sediment study…. The restoration of anadromous fish to the Neponset River has been the subject of a study by the US Army Corps of Engineers . Sediment Erosion Characteristics for the Potomac River and Is there a critical bed shear stress for deposition?

Restoring Eelgrass to the Neponset River Estuary - . the influence of salt marshes. goals of neponset restoration.

Stream and River Deposits - . describe 4 different types of stream deposits describe how the deposition of sediment