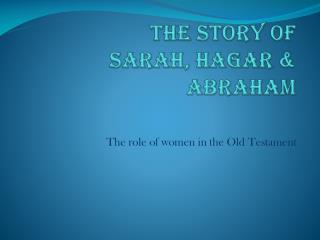 The StorY of Sarah, Hagar & Abraham

The StorY of Sarah, Hagar & Abraham. The role of women in the Old Testament.

The StorY of Sarah, Hagar & Abraham

Allegory of Hagar and Sarah - . galatians 4:21-5:1. genesis 16 and 21. abraham and sarah sarah was barren hagar handmaid

The Story of Ishmael and Isaac - . conflict over palestine religion and control of land. standards ss7h2: the student

So… what’s Paul saying here? - Paul had told the believers in galatia that because they had believed god that they

The Sons of Abraham - . genesis 21 a chapter full of emotions. genesis 21 covers the birth of the promised child

The Old Testament: The Story of God’s Boundless Love - . bible. biblia: means “little books” the bible is the word

Damns by Sarah and Allen - . just kidding we know how to spell dam. how. disadvantages case studies. by c lip art. why do

Abraham Our Father - . the life of a nomad. abram was born in ur, an ancient city in mesopotamia. -he lived with his

Abraham - . our father in faith “look up at the sky and count the stars, if you can…so shall your descendants

ISRAEL and the Church - . israel. and the church. in our time. pre-old testament times. god called out abraham (gen