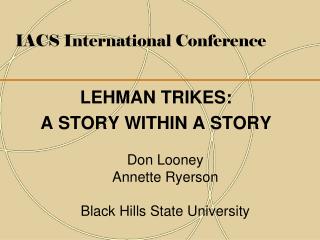 “The Story of an Hour” by Kate Chopin - . analysis and discussions. pre-reading discussion. what can we do in an

Miss Nelson is Missing - . by: james marshall. what we want to learn. content objective: i will make inferences about the

Story Based Corporate Lessons - Presentation on corporate environment through story.