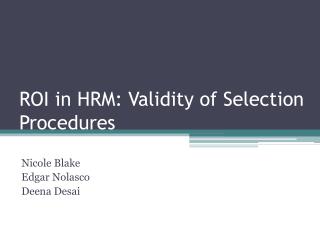 Chapter - . 6. training evaluation. objectives after reading this chapter, you should be able to:. explain why evaluation

Reasons for Evaluating Training - . companies are investing millions of dollars in training programs to help gain a

SEHS Topic 6: Measurement and Evaluation of Human Performance - . can you calculate the mean and standard deviation?(must

Characteristics of Effective Selection Techniques - . optimal employee selection systems. are reliable are valid based on