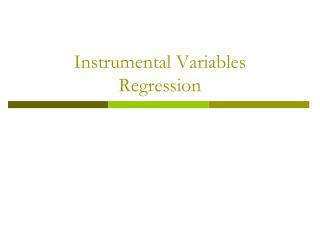 Instrumental Variables Regression. One Regressor and One Instrument The General IV Regression Model Checking Instrument Validity Application Where Do Valid Instruments Come From?. Three important threats to internal validity are: Instrumental Analysis - . instrumental analysis. the course is designed to introduce the student to modern methods of