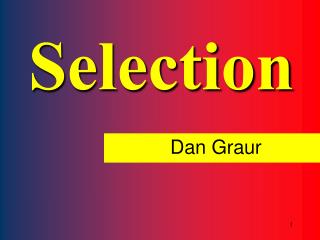 Selection - Selection allows you to choose between two or more alternatives. in c this means that the course of your

Selection - . learning objectives. explain that selection is related to decisions in programming use if …. else if

Selection - . dr. anil mehta. “selection is the process by which candidates for employment are divided into two classes

Selection - . boolean. what is boolean ?. boolean is a set with only two values : true false true and false are standard

SELECTION - . selection. process of choosing from a group of applicants the individual best suited for a particular

Selection - . criteria and job analysis. selection. what is selection? using scientific methodology to choose one

SELECTION - . selection process. hiring decisions are about finding the people who will be a good fit with the job and

Selection - . if. flowchart. a diagram that shows step-by-step progression through a procedure or system especially using

Selection - . the process by which one alternative is chosen over another. selections are made by comparing alternatives