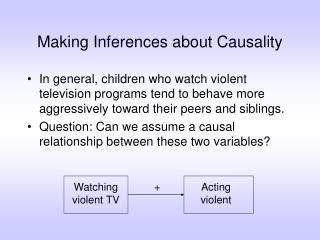 Watching violent TV. Acting violent. Making Inferences about Causality. In general, children who watch violent television programs tend to behave more aggressively toward their peers and siblings. Question: Can we assume a causal relationship between these two variables?. +.

Causality - . causality hill’s criteria cross sectional studies. principles of causality. when can we say that x is

Causation and the Rules of Inference - . classes 4 and 5. arlington heights and causal reasoning in

CAUSAL-COMPARATIVE - . causal-comparative. investigators attempt to determine the cause or consequences of differences

Design Approaches to Causal Inference - . statistical mediation analysis answers the following question, “how does a