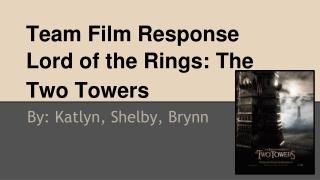 Team Film Response Lord of the Rings: The Two Towers

Team Film Response Lord of the Rings: The Two Towers Heartfulness Magazine - June 2018(Volume 3, Issue 6) - In this issue we hear from a number of our readers on the focus Nietzschean Philosophy as Background to an Examination of Tolkien’s The Lord of the Rings - . friedrich nietzsche.

Two sides of Odin in The Lord of the Rings - . made by: teo pucko. http://www.chez.com/sorcereroracle/accueil1.1.html.

Hi! Please come in, find a seat, check the agenda on the board, and get started on the warm-up below. - Hi! please come

Literature and Humor - . by don l. f. nilsen and alleen pace nilsen. stephen king said:. “fiction is the truth within

System Thinking and Project Management Process - . projects cannot be run in isolation. projects must operate in a broad

Film - . the origin of the name &quot;film&quot; comes from the photographic film (also called film

THE TRUTH ABOUT CELL TOWERS - . citizens for safe technology society. electromagnetic pollution may be the most