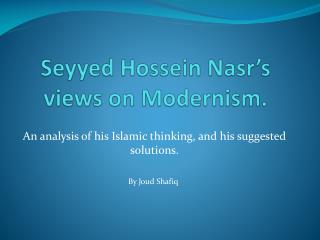 Seyyed Hossein Nasr’s views on Modernism. . An analysis of his Islamic thinking, and his suggested solutions . By Joud Shafiq. Presentation outline:. A- Definition of Modernism.

Modernism - . the guiding principles of this movement were: -a break from old traditions , -continual advancement -and

MODERNISM - . the death of the american ideal? 1914-?. the american dream: part i. usa as the “new eden” beautiful

MODERNISM - . marco maran. what is modernism?. it describes a series of reforming cultural movements in art, music and

Modernism &amp; Post-Modernism - . the waste land. 434 lines published in 1922 considered one of, if not the, most

Modernism - . some cultural forces driving modernism some of the major issues to which twentieth century literature