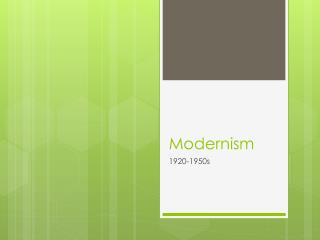 Modernism. 1920-1950s. Background (what happened between the 1860s and the 1900s?. End of Civil War American Expansion (US getting big and powerful) Rise of the youth culture World War I Increasing dominance of technology. Characteristics – the up side. Pursuit of the “American Dream”

Modernism in Literature 1915-1945 - . definition. modernism is a literary and cultural international movement which

Modernism unit - . begins on 11.18 campolmi. objectives 11.18 . summarize key historical events and how they relate to

REALISM TO MODERNISM - . the times—1850 to wwi. the world was on the move across borders (this included the great

SUSY Breaking by Meta-stable States - . chia-hung vincent chang. ntnu. based on a work with kuo-hsing tsao now at uic.

Modern to Contemporary - . photography from world war ii to the present. art photography- modernism and surrealism .

Early Modernism - . 1910-1935. by: kerstin ricca. early influences. early modernism was a movement characterized by its