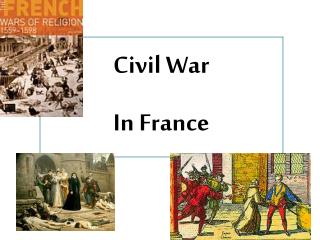 Civil War In France. Our objectives:. How did Calvinist beliefs threaten the French monarchy? You will learn that religion was not the only reason for the wars… Know the events leading up to the St. Bartholomew day massacre. Who is a Politique and what were his/her beliefs?

France - . by rachael 5 th class. cities in france. the capital city in france is paris. marseille, lyon, toulouse and

France - . every year, civil society coalition invests the parliament : good way to get officials to attend in 2006, the

CAUSES OF THE CIVIL WAR: A SUMMARY - . the civil war officially began with the bombardment of fort sumter by the

The Kingdom of France - . the kingdom of france. main idea: french kings called the capetians conquered lands held by the

New France - . where it all began!. what questions will we answer?. 1) why did france decide to settle along the st.

Absolutism - . louis xiv of france. absolutism. what are the key characteristics of absolutism? how does absolutism

Age of Religious Wars - . because of all the bloody conflict between protestants and catholics france, england, the