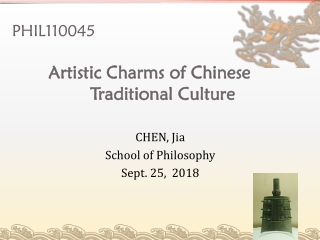 PHIL110045 Artistic Charms of Chinese Traditional Culture. CHEN, Jia School of Philosophy Sept. 25, 2018. Music: the Rites Embedded in Music. I. The Origin II. The System of Rites and Music III. The Culture of Rites and Music. Chronological Development.