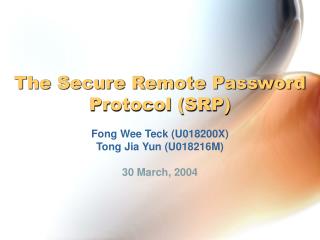 Remote Desktop Protocol - . remote desktop protocol ( rdp ) is a multi-channel protocol that allows a user to connect to

Secure Password Generator | LogmeOnce - Is your password secure? are you sure? now you can find out the real strength of

Secure Remote Access: SSH - . what is ssh?. ssh – secure shell ssh is a protocol for secure remote login and other