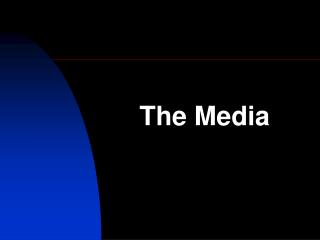 The Media. Learning Objectives:. By the end of the unit you should have a knowledge and understanding of: - What makes up the media - The different ways in which sport is covered in the media - The positive and negative effects which the media have on sport. ?. ?. The Media. ?. ?.

The Media - . what is meant by the media?. news organizations and journalists of either the print (newspapers,

The Media and Popular Culture - . the mass media are diversified media technologies that are intended to reach a large

Race and the Media - . dates and mascaro. 2005. african americans in film and television . journal of popular film and

Connecting in a Globalized World through Social Media - Why have a personal learning network (pln)? due to advanced