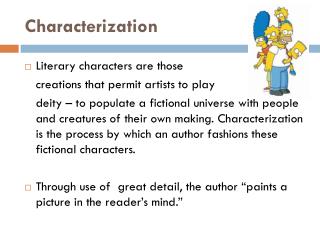 Characterization. Literary characters are those creations that permit artists to play deity – to populate a fictional universe with people and creatures of their own making. Characterization is the process by which an author fashions these fictional characters.

Alain C. Diebold - Metrology and characterization requirements and challenges for the nano-world of integrated circuits

Adhesive Selection &amp; Characterization What You Don't Know Can Kill You - . blain olbert university of arizona

Do Now: Tell This Story Today’s Title: The Six Traits of Writing and Characterization - Page: 11 left. do now: tell

Workload Characterization of the 1998 World Cup Web Site - . a topic on web traffic. why study of web traffic needed?. to