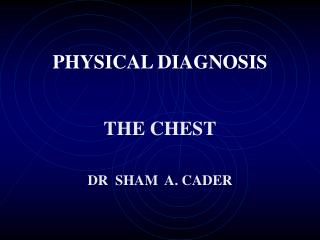 PHYSICAL DIAGNOSIS. THE CHEST DR SHAM A. CADER. THE ORGANS. ANATOMY. One should have a clear understanding of anatomy of the respiratory system to perform a proper physical exam. Some of the important anatomical details are outlined below. . TRACHEA.

Purpose of General Physical Examination - . to confirm an overall state of health baseline values for vital signs to

CHAPTER 16 LUBRICATION SYSTEM OPERATION AND DIAGNOSIS - . objectives. after studying chapter 16, the reader should be