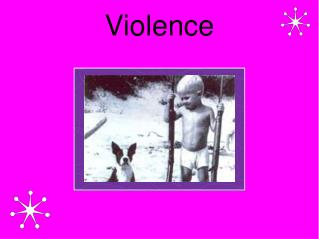 Violence. Violence. Acts of aggression and abuse that cause or intend to cause injury to a person Violence is often a crime There are 2 types of violence: random violence and coordinated violence Military force is not considered violence. Violence Related Definitions. Assault VIOLENCE - . from the dawning of man, violence has always been one of the defining characteristics of humankind.

Violence - . unit 6. aggression , violence, and the televisions’ impact on

VIOLENCE &amp; RELATIONSHIP VIOLENCE - . dating violence. how it starts and what we can do to stop and prevent it.

Violence - . violence - threat of or actual use of physical force against oneself or another person victim - person who