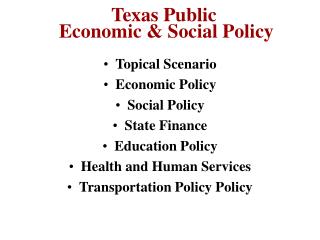 ECONOMIC POLICY - . ( or… “ how many harvard economists does it take to craft an economy policy? ”. fiscal vs.

Economic Policy - . an overview of chapter 18. pop quiz 18. what amendment legalized income taxes? when does the federal

Economic Policy - . q. what's the difference between an economist and a befuddled old man with alzheimer's? a. the

Week Four: Social class and public policy - . i. low income budget ii. video: let’s get married groups so why has

Economic Evaluation of Public Policy and Programs - . course overview econ 4140 fall 2010. objectives of the course. this