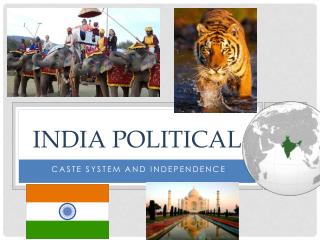 INDIA POLITICAL. CASTE SYSTEM AND INDEPENDENCE. Who Won Caste System Tag?. Was there any chance for anyone from groups 2,3,4 or 5 to win?. CASTE SYSTEM. Caste system – is the Hindu practice of social separation of individuals based on birth into a certain working class.

India-Political - . by the freemasons. kushan state. vast trade with europe use of monsoon winds to facilitate trade with

The British Empire in India - . i - indian imperialism began with the british east india company- set up trading posts in

Comparison of 3 political parties from Pakistan, India and Bangladesh - . submitted by &lt;student name&gt;.

POLITICAL ECONOMY OF ARUNACHAL PRADESH IN A RISING INDIA - . center for china’s borderland history and geography

How have colonization and imperialism contributed to the political, economic, and cultural formation of South Asia?