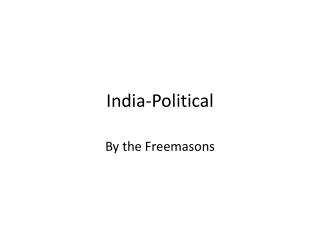 India-Political. By the Freemasons. Kushan State. Vast trade with Europe Use of monsoon winds to facilitate trade with Europe Establishment of Roman colonies along trade routes from Indian Ocean and Mediterranean Exported cotton, ivory, indigo, pepper , and textiles.

The Political Frame - . moliere’s the misanthrope. it is hard to dislike politics without also disliking people. like