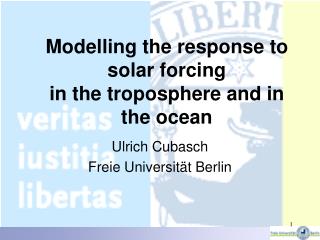 Modelling the response to solar forcing in the troposphere and in the ocean. Ulrich Cubasch Freie Universität Berlin. Outline. Motivation and background Description of the model The experiments and results the last 1000 years the last 150 years, and detection and attribution Objectives understand differences between ocean and atmosphere that cause the ocean to be the “memory” of the - Stem.

Preparing for the future : the role of mathematical modelling - . gabriele kaiser university of hamburg convenor icme-13.

The Ocean Habitat - An ocean is a large, deep body of salt water. oceans cover three-fourths of earth. different plants