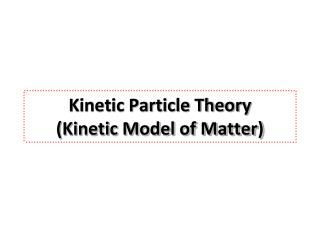 Kinetic Particle Theory (Kinetic Model of Matter). You are expected to…. describe the three states of matter and explain their inter-conversion in terms of the kinetic particle theory. show understanding that Brownian motion provides evidence for the kinetic molecular model of matter.

Molecular Composition of Gases - . chapter 14 (page 440). essential question!!. why is it important to know the volume -

Feb 10 - . warm up – grab a packet from the black cart and warm up - get your lab notebook set it up for a demo if

A level Physics Hidden Depths - . peter rowlands. the structure of this presentation. the presentation will be in four