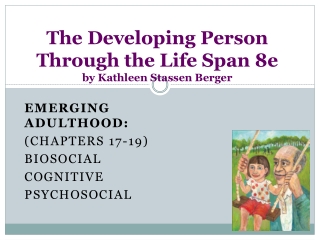 The Developing Person Through the Life Span 8e by Kathleen Stassen Berger. Emerging Adulthood: (Chapters 17-19) Biosocial Cognitive Psychosocial. Emerging Adulthood. The period between the ages of 18 and 25, which is now widely thought of as a separate developmental stage.